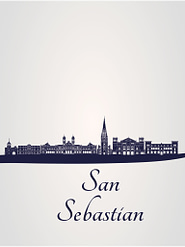 This is an article taken from the bicycledutch website.

Most cycle tunnels in the Netherlands have a work of public art on their walls. One of the reasons is that art makes the tunnels less scary. A cycle tunnel in Zaltbommel was dedicated to an artist who was born in that city, because the opening of the tunnel happened to take place in the same year that she would have been 100 years old.

The way the tunnel looks is not very special from a Dutch perspective. It is generally following the latest design recommendations. You can see through the tunnel to the end. There is extra light in the middle through an opening in the ceiling and the walls are reclining. When the provincial road passing Zaltbommel, the N322, was expanded from 2 lanes in total to 2 lanes in each direction, a level crossing for cycling wouldn’t be safe anymore.

So a cycle tunnel was integrated in the plans for the road expansion. The tunnel was finished in 2016 and that was the year the town celebrated the 100th birthday of one of the more famous people to come from Zaltbommel, illustrator Fiep Westendorp. That is why the decision was taken to recreate some of her iconic drawings on the tunnel walls in the form of public art.

The children Jip and Janneke, the main characters in a series of books by Annie M.G. Schmidt, must be the most well-known characters drawn by Fiep Westendorp. English versions of these books are available.

Fiep Westendorp was born in 1916 and she illustrated numerous Dutch children’s books. Her most well-known characters must be Jip and Janneke. These children can still be seen on many objects today. They were created in 1953 for a newspaper. At that time newspaper illustrations were still in black and white which gives these characters a very distinct look. Fiep worked until her death in 2004.

You can find a second work of public art on one of the tunnel walls. A poem that was especially written for this tunnel by former council member Thom Ummels.

The explanation about the public art in the tunnel, the reason for its existence and how it was created and financed, cannot be missed.

The cycle tunnel in Zaltbommel is now referred to as Fiepstunnel. Which is a word play. Because the artist’s first name was Fiep, her tunnel would be “Fiep’s tunnel” (Fiepstunnel in Dutch). That is conveniently close to the Dutch word for cycle tunnel; which is Fietstunnel.

The cycling girl on the tunnel wall (left) is from the book Fiep on the bicycle which was not only illustrated but also written by Fiep Westendorp.

The cycling lady on the tunnel wall (left) looks very much like her original (right). She only cycles the other way and she seems to have lost a bit of weight after cycling all those years.

The Fiepstunnel was festively opened in July 2016 – in the pouring rain. The cheerful drawings made the rainy day a lot better already. The original illustrations had been recreated by Gayan de Muynck and he did a really great job. When you compare his drawings on the wall with Fiep’s originals they are very much alike.

The drawings with people on bicycles drew my attention even more. They were done very well too. The cycling girl is from the book “Met Fiep op de Fiets” (With Fiep on the bicycle) which is a book that was not only illustrated but also written by Fiep Westendorp. Unfortunately is doesn´t appear to be available in English.

The cycle tunnel in Zaltbommel is wide enough for side-by-side cycling.

The work of art on the tunnel walls cost about 60,000 euros. Most of that sum was for the protective coating. Unfortunately that didn’t seem to have worked too well at first. People were rightly complaining that the tunnel had become really dirty after a year already.

So in the spring of 2018 the tunnel walls were cleaned and there must have been a new protective coat that worked much better. When I visited the tunnel almost one-and-a-half-years later it was still clean, crisp and a very bright white.

There is LED lighting in the tunnel, so it also feels socially safe to use it at night.

To sum it all up: this tunnel is really lovely.

This week’s video: the cycle tunnel in Zaltbommel.

Another famous example of cheerful public art on a cycle tunnel wall is one I’ve shown you before: the Silly Walks tunnel in Eindhoven.

Five cycle tunnels in the province of UtrechtIn “Original posts”

A ride from Market to Market (3)In “Original posts”

2 comments on “Cheerful art in a cycle tunnel”

This site uses Akismet to reduce spam. Learn how your comment data is processed.